The Word Shia and its Meaning from Sunni sources 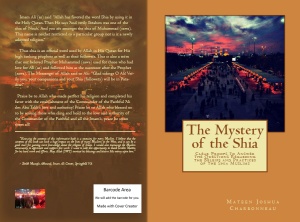 The term Shia literally means follower. It is a term that Allah used in the Quran to refer to the followers of his Prophets. An example was Prophet Abraham (as) who was mentioned in the Quran specifically as the shia of Noah (as):

Imam Ali (as) said “Allah has favored the word Shia by using it in the Holy Quran. Then verily He says ‘And verily Ibrahim was one of the shia of Noah.’ And you are amongst the shia of Muhammad (sawa). This name is neither restricted to a particular group nor is it a newly adopted religion.” [1]

In another verse, the Quran talks about the Shia of Moses

Thus shia is an official word used by Allah in His Quran for His high ranking prophets as well as their followers. This is also a term that our beloved Prophet Muhammad (sawa) used for those who had love for Ali (as) and followed him as the successor after the Prophet (sawa).

The Messenger of Allah said to Ali: “Glad tidings O Ali! Verily you, your companions and your Shia (followers) will be in Paradise.”

Therefore we see the Messenger of Allah (sawa) used to say the phrase “Shia of Ali.”

The Messenger of Allah (sawa) said: “The Shia of Ali are the real victorious on the day of resurrection”

The Messenger of Allah said: “O Ali! (On the day of Judgment) you and your Shia will come toward Allah well pleased and well-pleasing, and there will come to Him your enemies angry and stiff-necked (i.e., their head forced up).

A more complete version of the tradition, which has also been reported by Sunni narrators, is as follows:

Ibn Abbas narrated: When the verse “Those who believe and do righteous deeds are the best of the creation (Quran 98:7)” was revealed, the Messenger of Allah (sawa) said to Ali: “They are you and your Shia.” He continued: “O Ali! (On the day of Judgment) you and your Shia will come toward Allah well pleased and well pleasing, and your enemies will come angry with their heads forced up.” Ali (as) said: “Who are my enemies?” The Prophet (sawa) replied: “He who disassociates himself from you and curses you. And glad tiding to those who reach first under the shadow of al-‘Arsh on the day of resurrection.” Ali asked: “Who are they, O the Messenger of Allah?” He replied: “Your Shia, O Ali, and those who love you.”

Excerpt from Mystery of the Shia by Mateen J. Charbonneau Available at: