Imam Ali’s (as) birthplace was the Kabah

Another indication of Ali’s special merit was his birthplace. No one else, from Adam down through all
the prophets, possessed such a distinction. Of all human beings, he alone was born in the sacred precinct
of the Ka’ba. At the time of the birth of the Prophet Jesus his illustrious mother was forced to leave the
Holy House. A voice said to her: “O Mary! Leave the Baitu’l-Muqaddas, since it is the place of worship
and not of childbirth.”
But when the time of Ali’s birth approached, his mother, Fatima Bint Asad, was asked to enter the Ka’ba.
And this was not an accidental affair as if a woman was in the mosque and suddenly she was delivered
of a child. She was expressly called to enter the Ka’ba, the door of which was locked. Some uninformed
people think that Fatima Bint Asad was in the Holy Mosque when she felt labor pains, could not go out,
and gave birth to the child. The fact was otherwise. It was the month of Fatima Bint Asad’s confinement.
She went to the Masjidu’l-Haram, where she felt labor pains. She prayed to Allah in the precinct of the
Ka’ba, saying: “O Allah! I pray to you in the name of your honor and awe, to put me at my ease in this
labor.” Suddenly, the wall of the Ka’ba, which was locked, opened.
Another report says that a voice was heard saying: “O Fatima! Enter the House.” Fatima went into the
House of Allah in front of a crowd of people who were sitting round that place and the wall returned to
its original condition. The people were greatly astonished. Abbas was also there. When he saw what had
happened, he immediately told Abu Talib because he had the key to the door. He instantly came there
and tried his best to unlock the door, but the door did not open. For three days Fatima Bint Asad
remained inside the Ka’ba, apparently without sustenance of any kind. This unusual event was the talk of
the town. At last, on the third day, the passage through which she had entered again opened, and Fatima
came out. The people saw that she had in her hands a lovely child. Both sects (Shias and Sunnis) agree
that no one else had ever been given such distinction.
Hakim in his Mustadrak and Nuru’d-din Bin Sabbagh Maliki in his Fusulu’l- Muhimma, Fasl I, p.14, say:
“No one before Ali was born in the Ka’ba. This was a distinction given to Ali in order to enhance his
honor, rank, and dignity.” 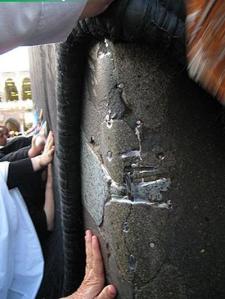 One thought on “Imam Ali’s (as) birthplace was the Kabah”