A Scholars Advice to a Convert

I can recall what an amazing feeling I had on my first day in the Holy city of Najaf, Iraq walking through the streets and seeing the bright golden dome of Imam Ali (pbuh). The city of Najaf is ancient and everything seems to be a dusty sand color, but the shrine of Amir Al-Mumineen is so bright and vivid that it brings life to the whole city. It seems to be the very center of existence for the lives of Najaf’s inhabitants. 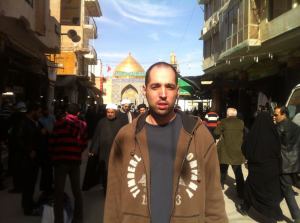 The second day I was there, we were walking with Sheikh Mustafa Akhound and a few friends when I noticed we were walking in a different way than usual. So, I asked where we were going as we were navigating through the back alleys of streets that were filled with low hanging electrical wires and air conditioning units protruding out of the walls. He said he wanted us to meet someone and that it was a surprise. Turns out it was his teacher and mentor Ayatollah Sayed Murtadha Shirazi. When we arrived at his door he welcomed us all into his home and had nice fruits and drinks for us. He allotted time out of his day to give us a small talk and to answer any questions we might have. 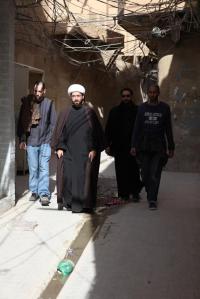 It was such a great honor to meet someone with such a high rank in Islamic knowledge. He was very nice and was genuinely interested to know about where I came from and how I chose to become a Shia Muslim. I spoke to him as much as I could with my broken Arabic and also Sheikh Mustafa would help with translating for me. He gave us a small lecture and then afterwards Sheikh Mustafa asked us if we had any questions that we would like to ask Ayatollah Shirazi. 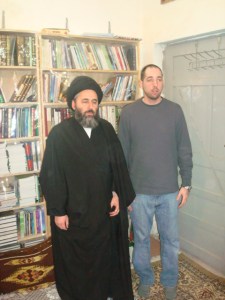 I had come all of the way from the United States and found myself sitting in the house of an Ayatollah asking me if I had any questions. I decided to take this opportunity to ask for some very important advice that would help me throughout my journeys in life. I chose to ask him how could we get closer to our beloved Imam Mahdi (May Allah hasten his reappearance).

He answered me with several things that I will list here. I have been thinking about my visit and it prompted me to write about it so that others can read this and benefit as well.

The first thing he replied was that this is an easy thing to say, but in reality it is not an easy task to accomplish. He continued to say that we needed to pray to Allah and ask Him to open our container and expand our capacity, so that we can receive the knowledge pertaining to Imam Mahdi (pbuh). Being among those who are close to the Imam means having a very high level of knowledge and piety, so we must be prepared mentally and spiritually to understand, comprehend and accept this knowledge.

He proceeded to say that one of the ways that we can gain proximity to the Imam is to fulfill all of our obligations (wajibat) that Allah has asked from us. Next is to stay away from all of the things Allah has forbidden us from doing (muharramat). This reminds me of the first thing he told me when he said that it sounded easy but in reality, was not an easy task at all. Last of all he told me that to become close to the Imam we should be careful of how we treat others. We should always treat others well, with respect and give them their due rights. We should never be oppressors and mistreat people.

That was the advice I received from the respected scholar. I hope that all of us can apply these principles he taught that day and become servants of the Imam of our time.

After that, I left that great city of Najaf and started my walk towards Karbala to pay my respects to Imam Hussain (pbuh) and the Martyrs (Shuhada). I saw how so many people were lined up with stands giving away all they had to the pilgrims. They were giving away food, tea and sweets. They had tents and blankets for sleeping and were even massaging the weak and fatigued pilgrims. They were ready and willing to give away anything they had for the guests of Imam Hussain (pbuh). I started to think deeply about what I had to offer in the way of Ahl ul Bayt (The household of Prophet Muhammad), peace be upon them.

For those who have not seen my documentary Journey of the Spirit on how I converted to Islam, I chose to become a Shia Muslim after studying both Christianity and Islam while serving my first year in a maximum-security prison. This was when I was 17 years old, in 1999. In total I served 9 years before my release. Throughout this time I did not work and I chose to dedicate my time to reforming myself and to learning the religion of Islam. I would read one book from cover to cover then start the next one repeating this cycle for 9 years, al-hamdu lillah. I also learned Arabic when I was 18 years old. Since my release from prison I have been active within the Washington, DC community.

Getting back to the story at hand, I thought that the best way for me to help people and to serve the cause of Muhammad and his family (peace be upon them) was for me to use the knowledge I had gained while in prison to compile and write books on Shia Islam. I learned that the father of Ayatollah Sayed Murtadha Shirazi had authored around 1,400 books. His name was Ayatollah Sayed Muhammad Shirazi and he was one of the great Maraja of his time. I decided to take this path and to help spread what I had learned to my fellow English speaking people.

Since I have returned from the blessed city of Karbala I have published three books on Shia Islam; The Suffering of the Ahl ul Bayt and their Followers (shia) throughout History, Christians who Defended and Died for Prophet Muhammad and his Family, and The Mystery of the Shia. Also, on the same day that my son Ali was born (in March of 2013), I started attending Islamic Seminary (Howza) taught by Sheikh Mustafa Akhound at the Imam Ali Center of Springfield, Virginia. I plan to keep writing more books and inshallah (God-willing) one day translate some of the great Shia books from Arabic to English. 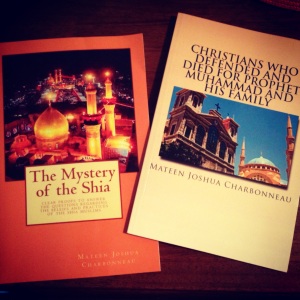 It has been about a year and half since I was in Iraq, but Ayatollah Sayed Murtadha Shirazi frequently asks Sheikh Mustafa about me and sends me his greetings. I feel very honored to have met him. It amazes me sometimes because I never would have thought while I was in that prison cell reading and studying about Islam that I would end up visiting the shrines of the ones I grew to love; Ahl ul Bayt (pbut). I also never would have thought that an Ayatollah would be sending me his greetings and taking an interest in me. It is very humbling and I hope to continue down this path of serving the Family of Muhammad (pbut).

Recently I heard that Sheikh Mustafa’s father, Sheikh Makki Akhound, was coming from Karbala to visit. I thought to myself that morning before my Howza class how great it would be if he could bring my books back to Iraq and present them to Ayatollah Sayed Murtadha. So, with this thought in mind I went to my class. Upon arriving at the masjid I saw Sheikh Makki and he asked me how my son and I have been doing. Before I could even say anything about him taking my books to the respected scholar he said “Mateen, Ayatollah Sayed Muratdha Shirazi sends his greetings to you and says he is very proud of the work you have been doing for Ahl ul Bayt (pbut). He wants me to bring your books to him.” I couldn’t believe what I was hearing! It was a great honor and achievement for me as a convert to Islam that an Ayatollah asked for my books.

I sent all three books back to Najaf with Sheikh Makki who presented them to him. He got a picture of the Ayatollah reading them for me and sent it to my email just this past week. I wanted to share this story with everyone and I hope that we all can take a look at what talents we possess and formulate a plan on how we can use these great blessings to serve the cause of Ahl ul Bayt (pbut) and grow closer to the beloved Imam of our time, Imam Mahdi (May Allah hasten his reappearance).

and also at Amazon

3 thoughts on “A Scholars Advice to a Convert”